The Legend of Creation 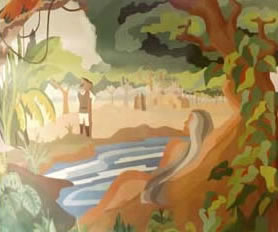 The origin of Santa Maria passes by indigenous tribes of minuanos and tapes that inhabited the region . Surveys indicate the birth of the city from a post of Indians called “Keep Santa Maria ” , which belonged to a resort missionary of the Society of Jesus. These and other considerations have been taken from the work of Aristilda Recchia , entitled ” The History of the City of Santa Maria ,” realizing that the way of the developing the site was small and a narrow path in the middle of cleared jungles.

According to José de Saldanha, The Minuanos, Inhabited in area or territory of the campaign, Coxilha de Pau Fincado. However, the majority, known as Tapes lived in the forest of Serra.

The village came to be known as “Camp of Santa Maria”, which later joined with “Boca do Monte” because it was close to the entrance of the first major trail that led to “São Martinho” in “Monte Grande” or “Serra de São Martinho” and it has all to do with the origin of the brand Hotel Morotin. Find out more by reading the “Legend of Ymembui” below:

It is from this legend of magic, love and fighting spirit that endeavors Morotin want to continue by making history in Santa Maria and region.

Learn about the Park Hotel Morotin